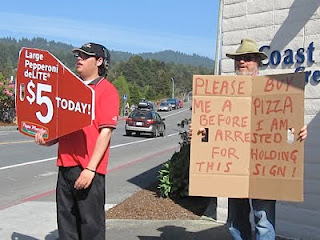 Arcata, CA – On Thursday May 19th Richard Salzman filed a lawsuit in Superior Court of California against the City of Arcata claiming that their Panhandling Ordinance is unconstitutional.

In March the City of Arcata declined Salzman’s request to amend its panhandling ordinance. ”I requested that they amend their ordinance so as to comply with our guaranteed protection of free speech as outlined in the United States Constitution. Since they declined to do so I felt compelled to file a complaint yesterday in the Superior Court of California against the city” said Salzman.

Salzman has stated that he is a proud lifelong member of the American Civil Liberties Union (ACLU) and staunch defender of the Constitution of the United States and the First Amendment right to free speech.

As written, the ordinance makes it a crime to merely hold up a sign asking for a hand out. By denying citizens constitutional right of free speech, Salzman contends the City Council overstepped its authority.

“If first they silence the poor and the homeless, and I say nothing, who will speak up when they try to silence me?” Salzman asked. He notes that the section of the ordinance against “aggressive panhandling,” including blocking one’s path, any physical contact or shouting, was left unchallenged by this legal action.