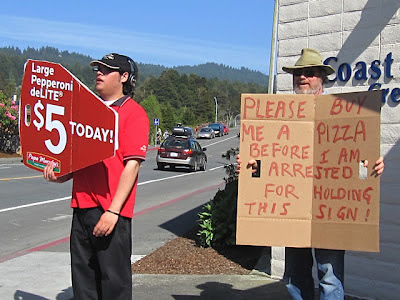 Arcata, California--Is it illegal to merely hold up a sign asking for
money?

The City of Arcata thinks it is, but a citizen lawsuit contends the city
overstepped its bounds and its panhandling ordinance is unconstitutional.

Arcata taxpayer Richard Salzman, who filed a lawsuit in Humboldt County
Superior Court against the normally ultra-liberal city, said: “If
first they silence the poor and the homeless, and we say nothing, who
will speak up when they try to silence rest of us?”

He noted that the section of the ordinance against “aggressive
panhandling,” including blocking one’s path, any physical contact or even
yelling, would be left unchallenged by his legal action.

But to achieve the city’s goal of criminalizing the 'speech'--or even a
mute appeal--of a few beggars, Arcata has criminalized all charitable
solicitations for money.

Salzman said, "The ironical aspect is that Arcata so far has
spent around $10,000 of the taxpayers' money defending a law so one
would not have to to read a sign asking, 'Buddy, can you spare a
dime?' How insane is that?"

The judge overruled an objection by the city's attorney and allowed the photo above
to be entered into evidence, illustrating the absurdity of the law during
the trial on May 23rd 2012.

The court has 90 days to rule on the case. The losing party will then
have the opportunity to appeal.